I spent nearly three days and two nights couch-surfing with four Italian girls from a village near Turin. Mari, the oldest, spent one gap year volunteering in Vienna, love photography and often document her trips in a notebook. Lu is the happy girl, a vegetarian, always singing and teasing everyone. Ceci and Betti seem more quiet, hard working and very sweet also. They go to classes at different times but always have breakfast together around 7 because Ceci have early classes in the morning, and they can’t stand seeing her eat alone. “It’s just a nice thing to do”, Mari said. “We’ll all go back to sleep after she leaves”. How sweet is that…

At least half of my time in Turin revolved around the girls. I followed them to the supermarket, chatted with them during breakfasts, stayed longer after dinners for a drink or two, and walked with them to school in the morning. 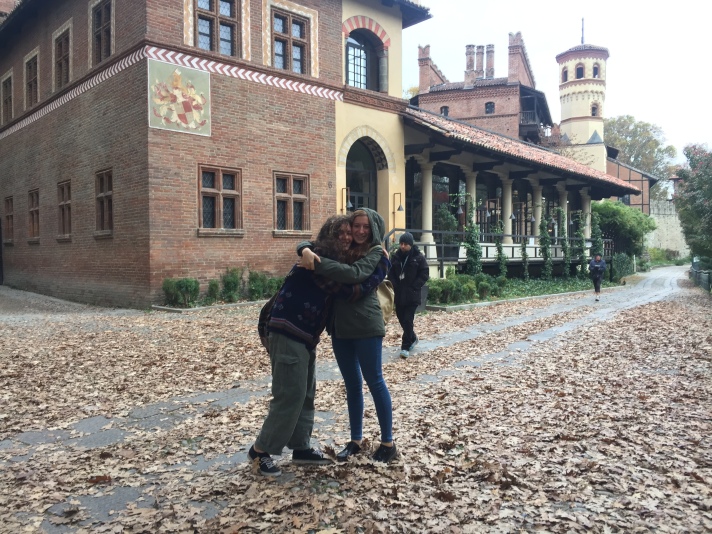 Like most of Italians I know, their breakfasts are pretty light with some cookies, a slice of bread and a cup of coffee/tea. It took me nearly two months to get used to this habit, because in Vietnam where I am from, people often eat big breakfasts with lots of meat and eggs. In Hanoi, I was too lazy to cook or go out for breakfast I’d rather skip it.

The girls shop for food every week. They would sit down to discuss the shopping list and send two girls to the supermarket to buy. The list is flexible though; since the shoppers are ‘empowered’ to grab anything they think have good value. I was surprised to see Mari and Lu picking some groceries that look a bit lumpy and misshapen. Later they told me that unattractive food, although perfectly edible, is always cheaper (only 70 cents per kg). I felt a little embarrassed I hardly take into account the price tag when it comes to food, especially in Vietnam when everything is so cheap. But well, I’m changing.

Sometimes I forget the girls are only 18-19 years old. While most Vietnamese girls never get out of their city or villages at their age, they already start solo-traveling around Europe after high school and speak more than one foreign language (Mari could even speak three, apart from Italian). Politics and culture were their favorite topics. On Tuesday morning we woke up to the frightening news of Donald Trump’s victory in the US election and immediately it became the subject of our morning chat (and the rest of the day).

They also love living the moments and find joy in the little things. Mari and Lu love taking slow walks from their home to university (or vice versa), just to see the leaves turning yellow in the fall and watch the sunset mirroring itself on the Po River. Sometimes they hang out in their front balcony in the evenings, having a simple bbq dinner with red wine, hear Cicilia play ukelele and all sing along. Such a pity there was no outdoor party during my stay since it was too cold and windy to organize one. The closest thing we did on their balcony was wrapping ourselves in blankets and talking about love. 🙂

Anyway, those are fragmented memories I just want to document at the end of my Turin trip, something I would reflect at some point in time when I think about the new friends I made during my Europe adventures.