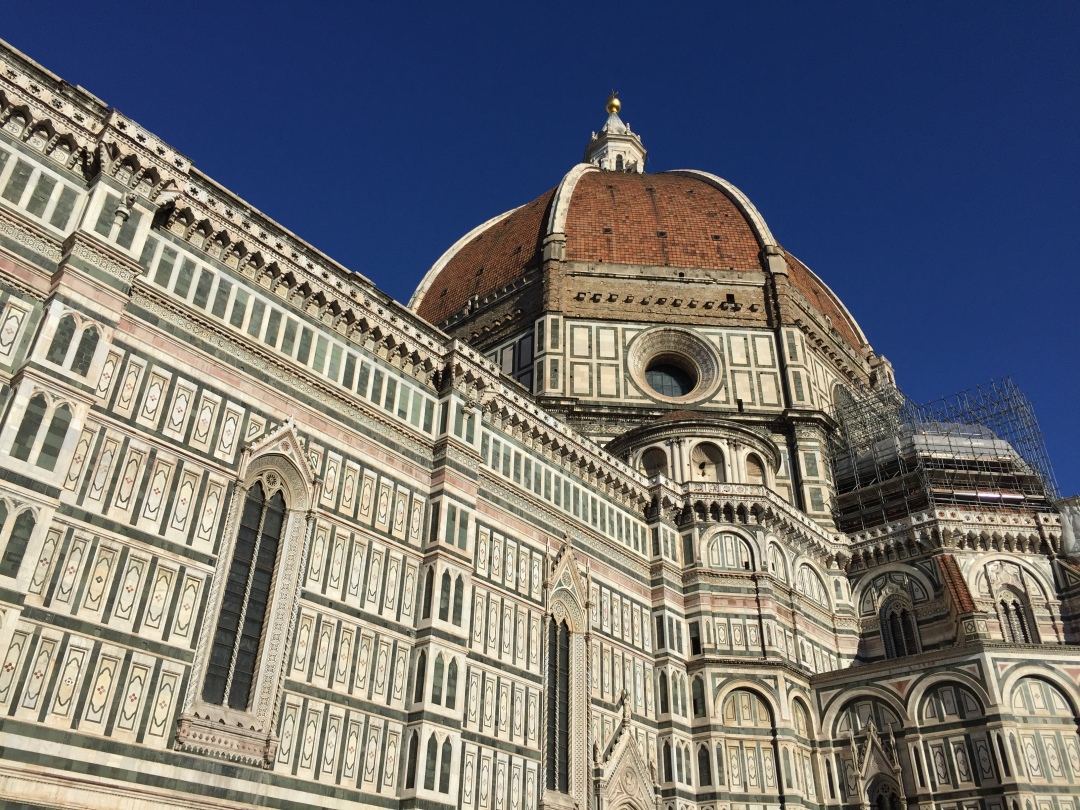 The second day in Florence we didn’t get out of the hotel until noon because of the problem with the water heater issue. Having so many places left unchecked we headed to Duomo straight from the bus stop. On Saturday the religious center of Florence was rather busy but the giant structure of the city’s main cathedral could be viewed easily from different angles. We first approached the church from the south side to appreciate its red brick cupola, one of the most renowned Renaissance masterpieces. Weighing 37,000 tons, it was unbelievable that the dome was erected without any flying buttresses or free standing scaffold!

Then at the entrance, we feasted our eyes on the church’s spectacular front with elegant rose windows, green bronze doors and sculpted statues adorning a multi-colored facade. The niches of Duomo host famous Tuscan personalities of various fields from art (Michelangelo), engineer (Galileo), literature (Dante) to religion (Pope Eugenius IV). Having said that, it was rather difficult to recognize who is who without a binocular.

Statues and flowers adorn the exterior 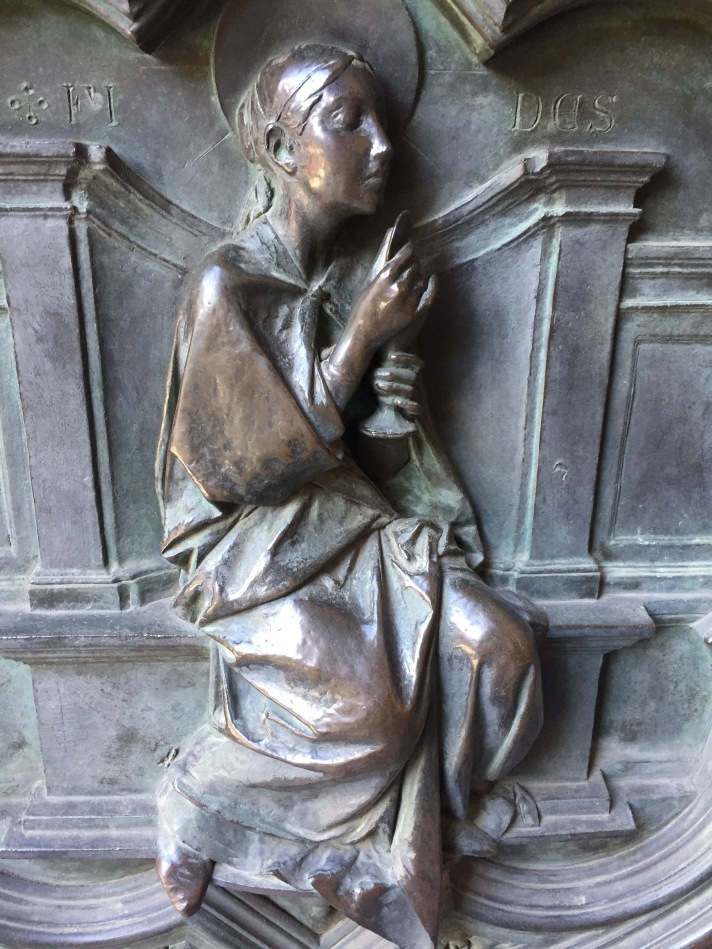 The entrance bronze door with the figure of Mary

It took us half an hour in the queue to get inside the Duomo. At first glance the interior seemed plain but most of the celebrated artworks were not at eye level. The magnificent fresco of The Last Judgment up in the ceiling. The circular stained glass windows below the octagonal dome. The mosaic pavement underfoot. Then above the main door there was a very unusual clock that runs counter-clockwise and keeps ‘Italian time‘. 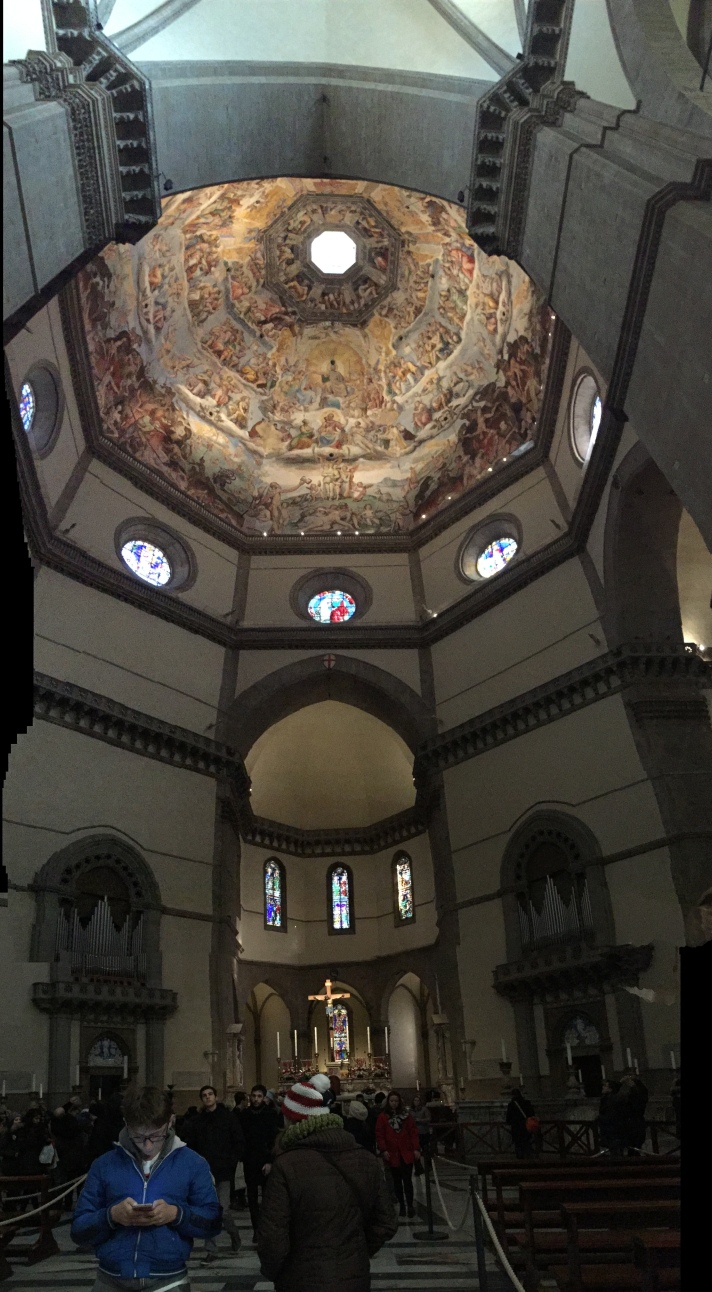 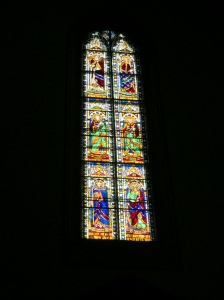 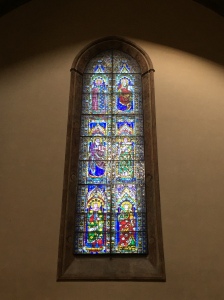 Not buying the combo ticket it was such a pity we couldn’t climb the Brunelleschi’s cupola that made him widely known as a pioneer of the Renaissance. Fortunately we could peek at his tomb over an iron fence at the basement.

The six-hundred-year-old Loggia was our next stop of the day. Overlooking the L-shaped central square Piazza della Signoria it’s an unmissable public gallery where a number of Roman and Renaissance masterworks were on display. These were the most prominent ones:

The rape of Polyxena by Pio Fedi

The Rape of the Sabine Women by Giambologna

Perseus with the Head of Medusa by Benvenuto Cellini

Except for the Perseus many sculptures have turned greyish after centuries of natural weathering but still look lively. There was so much details to look at: the poses, the gestures, the facial expression, the meticulous depiction of bones and muscles; even the decorative reliefs were carved so sophisticatedly and beautifully. To get a sense of each sculpture you would need to move around its multi-faceted surface and spend time studying the work from various angles.

Immersed in the world of art I almost forgot about my companion. Later I spotted G at the entrance of the town hall Palazzo Vecchio adjacent to the Loggia. It was his second visit to Florence so G took this chance to search for any fascinating parts that he missed eight years ago. We re-joined for a quick tour around the square before heading to the Boboli gardens, a lesser known site but G insisted that it was worth seeing.

The walk over Ponte Vecchio, the oldest bridge in Florence, was quite relaxing in the sunshine. Small jewelry and leather shops were lined up on both sides of the cobblestone walkway dated back to the medieval times. It took  us no time to reach the Pitti palace building which hosts the gardens, but we walked past it to get a pizza for our late lunch. In Florence, time was running so fast we never eat properly, but both of us would rather spare extra time for sightseeing and visits. 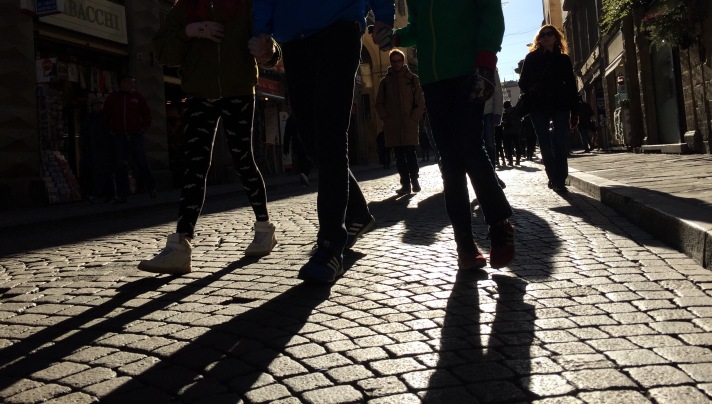 View from the bridge

The square in front of Pitti Palace

It was nearly 2.30pm when we entered the ticket office at the right corner of the palace building, meaning there’d be only two hours left for us to tour the 45,000-square-meter open air museum. We studied the gardens’ layout carefully and picked out the must-sees: Buontalenti cave and the porcelain museum. 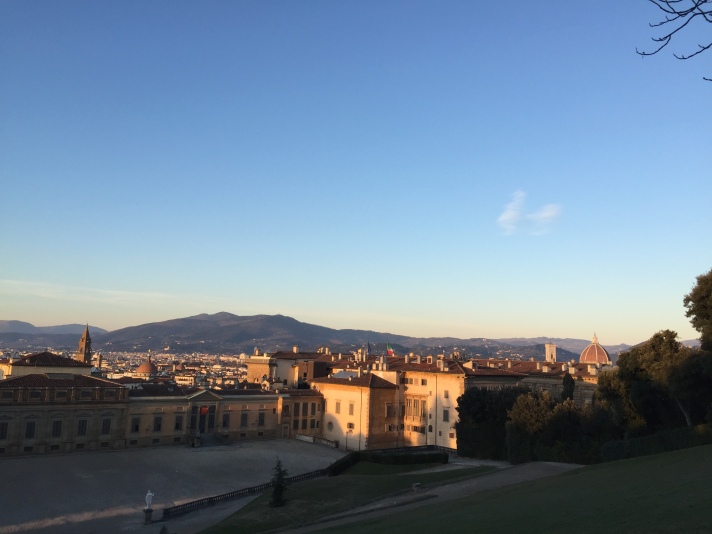 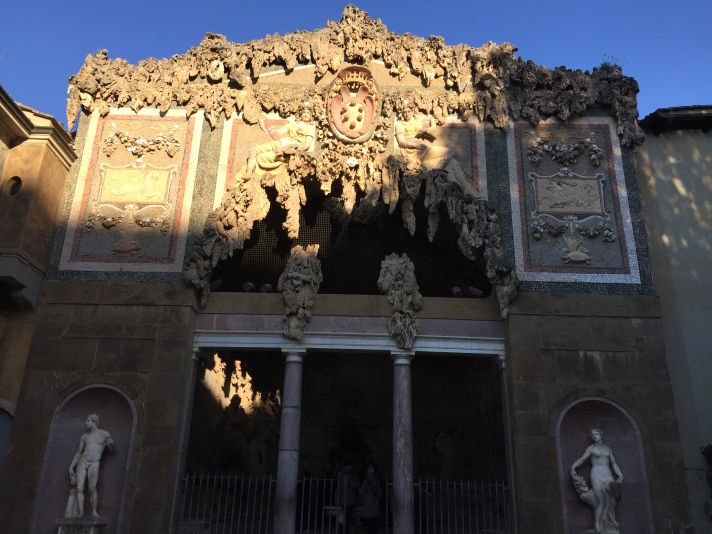 The bizarre entrance of Buontalenti cave 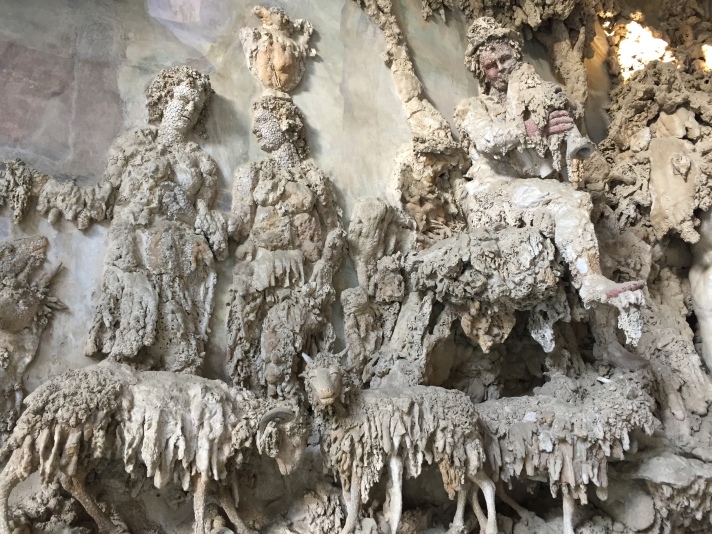 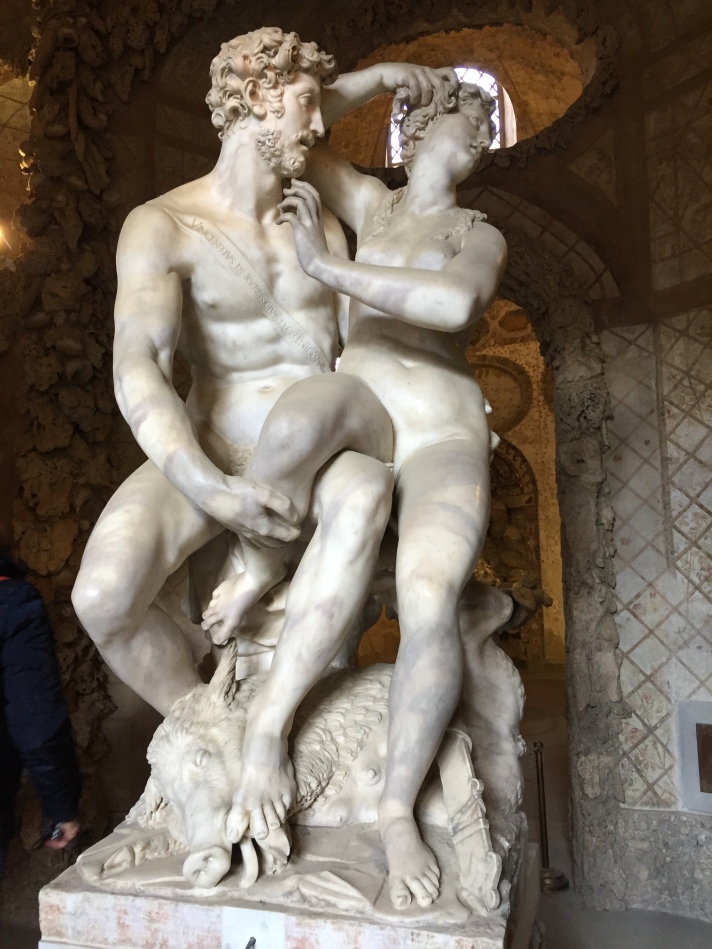 The Paris and Helen by Vincenzo de Rossi

The Bathing Venus by Giambologna

The twin trees near the entrance of Buontalenti cave

The fountain of Neptune

The olive farm behind the porcelain museum, which G described as a typical landscape of the Tuscan countryside 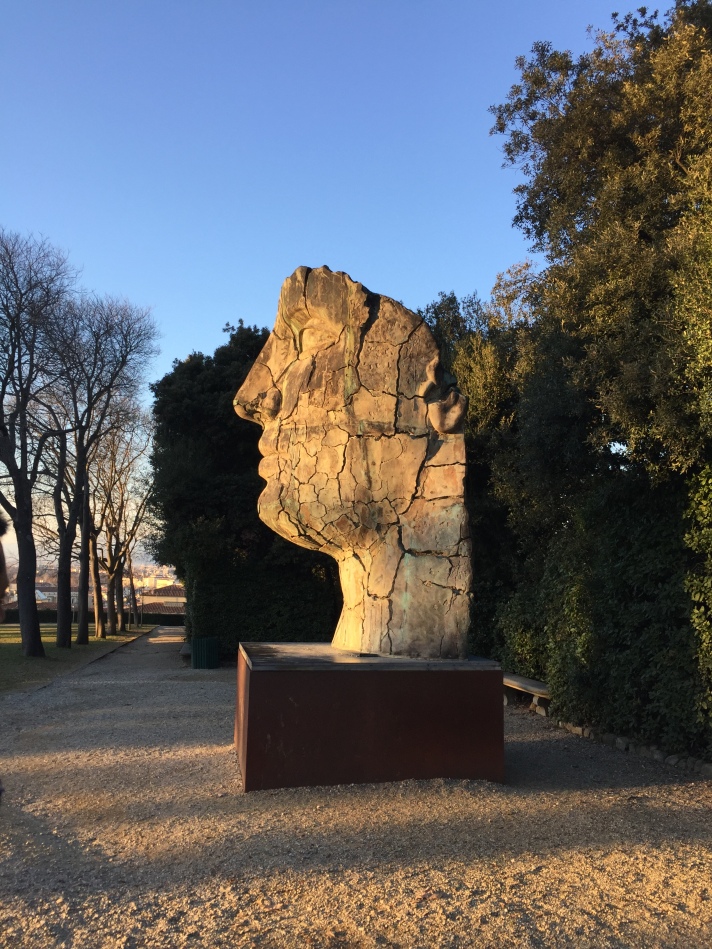 The beautiful grotto and picturesque look-out points nicely wrapped our little excursion. It was a huge area, still we both felt so refreshed mentally and physically at the end. The underrated Boboli gardens was definitely a highlight of our three-day visit to Florence!