A visit to the Kiwi farm

Last weekend I visited Ambury regional park, a huge working farm on the southern end of Auckland. The farm was out of the way but not too remote. It was rural and restful and packed with activities to entertain a large group.

I was joined by three friends on a pleasant bus ride to the farm, which seemed so short as we chattered about anything and everything along the way. We’ve only met but I already felt a good vibe going on. One of the girls has just returned from Rotorua and another is planning the South Island trip, so we were all excited to hear their stories. We also mentioned haircuts and skins and clothes in between, among many other things. The light chatters continued as we got off near the junction between Muir Ave and Ambury road.

Ambury park was an immense area with long electric fences surrounding the livestock enclosures. Some paddocks were open for people to walk in. There was a nice assortment of farm animals although each came in a small quantity. But we could actually get up close and personal with them. The white sheep was wary of humans, but the rest was friendlier. The horses with long, silky hair and feathered feet seemed to bond with almost everyone. 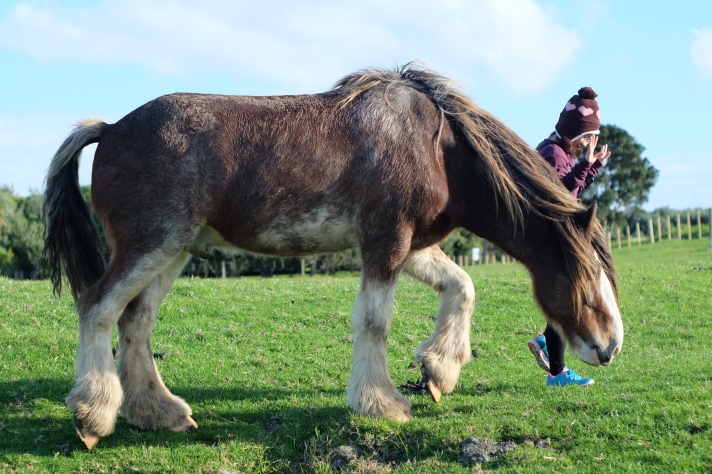 Other friends joined us later in the mid-afternoon. They missed the bus once and enjoyed the seaside walk outside the park so much they lingered there for photos. Anh brought along her lovely daughter who is just another sweetheart. The little girl was carried on her mom’s hip and together they fed him with some dry grass from the pasture ground. It was probably Bong’s first encounter with so many farm animals so she was a little overwhelmed. 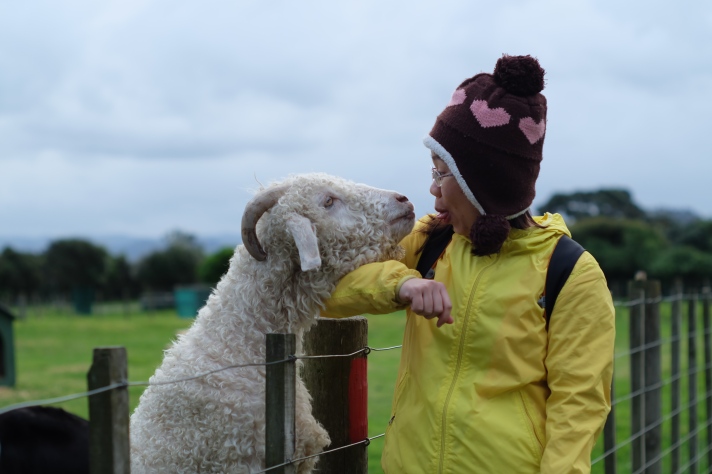 A potluck picnic followed before the nightfall. We laid down a mat on the high ground by the horse paddock and started enjoying the afternoon snacks. Anh made yummy meatballs and Bong shared her favorite potato chips. I brought along pumpkin seeds and dark chocolate with almond. By now the little girl has felt more comfortable with her Mom’s friends and looked more cheerful. She started initiating some games to bring everyone together and, while walking back to the bus stop, managed to remember all of our names.

4 thoughts on “A visit to the Kiwi farm”